The Treasure Island Music Festival takes place this weekend, and one of Sunday’s highly anticipated artists performing is Grimes. Check out our interview with her right after the Noise Pop Music Festival in early 2012.

Claire Boucher, better known as Grimes, is the aspiring queen to an electronic, dream pop throne. Her songs ooze of definitive, trip hop strangeness; bubbly synths pop and explode over punchy, electronic percussion, taking listeners on a Stankonia-influenced ride that is half neo-soul, half girl-power pop. And how can we forget Boucher’s vocal delivery? She emulates pop songstress Mariah Carey to a T on her recordings; high-pitched howls are projected through Boucher’s electronic maze, searching for lost ears in need of synth-pop saving.

Having recently performed at this year’s Noise Pop music festival in San Francisco, CA, Grimes spoke with B-Sides about her love for hip hop, collaborating with her influences, and her undeniable obsession with fellow Canadian artists Drake and The Weeknd.

I noticed on your Twitter that one of your followers imagined your music being the soundtrack for Diva Plavalaguna from The Fifth Element. Do you agree?

Claire Boucher: Yes. The Fifth Element was pretty big for me when I was younger. I remember trying to find techno remixes of opera after watching that movie.

How have you taken the reception of your latest album, Visions, so far, considering how it’s been well-received by critics and fans alike? 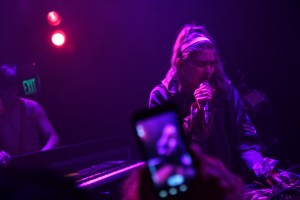 CB: I don’t really read the press on my music, so I don’t know what’s up. I don’t want to know what people say: artists can get so fucked-up by press; even if people say positive things the artist may become obsessed with creating music that sounded like it did when it was popular.

How was it working with your manager, Sebastian Cowan, on Visions?

CB: The recording process was really good. My manager played a key part in everything that happened; since he’s a sound engineer I would call him and ask him, “How do I do this,” or “What do I put here?” Whenever I have any questions I call him; he’s like the grand mastermind of it all because he also mixes and masters my music.

I also like how with Visions, there seems to be undertones of 80s-90s hip hop influences surrounding each song.

CB: I love hip hop. It’s one of my main inspirations.

What specific hip hop groups have inspired you? I know you’re a fan of Jedi Mind Tricks.

CB: Jedi Mind Tricks are my all-time favorite hip hop/rap group. Them, Dungeon Family and Outkast are my favorites because they’re like the most psychedelic and experimental groups. Their production is just really beautiful at times; I have an album of Jedi Mind Tricks instrumentals, and it’s so beautiful. It’s just really inspiring. I also like Jedi Mind Tricks because what they rap about is relatable;  it’s not demeaning to women, and that’s what most rap is about. Rap and hip hop are such amazing art-forms, and I like when it’s explored, and it’s psychedelic or weird.

Outkast can be pretty weird, but they’re smart; it’s not typical or lyrically diverse, but the production is always crazy. I just like taking hip hop and mixing it with experimental and electronic music. I’m trying to do what Outkast has been doing, but in a different way. In my opinion they’re one of the most innovative groups to come out of music in the last 50 years.

Which Outkast album would you say is your favorite?

CB: It’s not considered their best, but Stankonia is a classic for me. It’s the first album I ever bought; it’s like, my first album, and I’m very attached to it.

Continuing on with hip hop, would you ever work with Drake or The Weeknd, considering they are also Canada residents like yourself?

CB: I am so obsessed with the both of them. I feel like I need to work on my skills as both a producer and singer, before working with them. They’re production and everything is just super clean, and super perfect. When I first heard The Weeknd I was pretty floored by him; [going on to Drake] and the song “Take Care,” with Drake and Rihanna, is probably one of my favorite songs right now.

What I like about “Take Care” is that it works as a dancefloor track, but you can also sit and just be really depressed to it. To me that’s one of the best ways to listen to music; to be able to dance and get emotional to it.

Your recordings and live setup primarily relies on your use of vocal pedals, and having to loop each vocal part precisely with one another. Can the procedure be tedious at times, and have groups such as Tune-Yards influenced your direction?

CB: It can be tedious at times, but I really like doing it. The only thing that sucks is getting feedback in my loop. That, and timing can be very big issues. You just have to be super mathematical so everything is in time with the music.

I sort of figured out how to configure everything by watching hours of footage of Tune-Yards. Like, I am going to master the looping pedal. She [Tune-Yards’ vocalist Merill Garbus] is very skilled.

That would be cool if you did some vocal, loop pedal collaboration with Tune-Yards.

CB: 4AD [the music company that houses both Grimes and Tune-Yards] is thinking of putting together a South Africa tour with us and Tune-Yards, that I think would be very cool. Like if I could go anywhere, the places I would want to go to are China, and Africa.

You recently performed at this  year’s Noise Pop festival. How was the energy during your performance, and any memorable moments?

CB: Oh my god, it was just the best show ever. My Noise Pop performance was one of the first times playing with a full band, and everything just went perfectly. There were so many people there just dancing, and the sound was perfect.

You’re a fairly young artist in your early 20s; how have you taken the success you’ve received, and have you met anyone you’ve always wanted to meet?

CB: Oh my god yes. Like, I tweeted at [London musician] BlaWan and then he sent me a direct message, and maybe we’ll end up working together on a song. It’s really cool when an artist you like, wants to work with you. It’s one of the best parts of this, actually. I just have so much respect for my contemporaries. Like, I’m playing with The Dream at Pitchfork [Pitchfork’s SXSW showcase in Austin, TX]. I love The Dream.