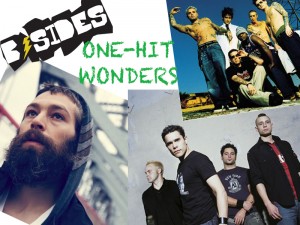 Every year, there’s that one artist that comes out of nowhere with an incredibly catchy tune that leaps to the top of the charts. The artist then becomes the music darling for millions of fans whose phones are blaring the track as the ringtone and then just when people crave more, the artist disappears into oblivion. Before “Face Down” by Red Jumpsuit Apparatus, there was “Headstrong” by Trapt. Let’s run through the Top 11 One Hit Wonders from the 2000s! Songs that everyone loves and will never forget, yet what happened to the artists/bands that created them? It seems like the only remembrance we have of them are of their one hit wonder hits…

Fort Minor was an American hip hop side project of Mike Shinoda, a co-lead vocalist of the band Linkin Park. The  song “Where’d You Go,” was released on Fort Minor’s fourth and final album called The Rising Tied, back  in 2006. The song featured artists Skylar Grey (aka Holly Brook) and Jonah Matranga. The song was said to be about someone feeling left behind in a long-distance relationship, while their significant other is busy on the road promoting their career. The song was the band’s biggest commercial hit, it reached number 4 on the Billboard Top 100 and received Platinum by the RIAA in 2009.

10.) Ladytron – “Destroy Everything You Touch”

Ladytron are an electronic music band from Liverpool, England that formed in 1999. Their single “Destroy Everything You Touch” was the second single on their third full length album called Witching Hour that released in 2005. The song reached number 42 on the UK Singles Chart, which is the highest any of the band’s singles has ever reached. The song is about the resentment one feels from a bitter break up with someone, insinuating that the person they dated was emotionally cold and hurtful.

Afroman is an American rapper who got his big break from this song’s popularity, the song was nominated for a Grammy award back in 2002. It was released in 2001 on the album Because I Got High and was about how the rapper’s cannabis usage was getting in the way of his life. Examples included in the lyrics are: failing college classes, cleaning his bedroom, losing his job, and paychecks going to missed child support payments. The track was uploaded and downloaded on Napster to the point to where it made its way on The Howard Stern Show. The song was the theme song for the movie Jay and Silent Bob Strike Back, as well as being featured on other films such as Disturbia, A Thousand Words, and The Perfect Score.

The Rapture is a New York indie rock band that many genres blended into their music, such as post-punk, acid house, disco, electronica, and rock. They are considered the ones who began the post-punk revial of the early 2000s.  This song was on their second album called Echoes,  and was listed as number 16 and 6 on Pitchfork’s and NME’s tracks of the decade. The song was produced by James Murphy and tim Goldsworthy of DFA Records.

7.) The Postal Service – “Such Great Heights”

The Postal Service was an electronic music group that consists of vocalist Ben Gibbard (Death Cab for Cutie), producer Jimmy Tamborello (Dntel and Headset), and Jenny Lewis (Rilo Kiley) who performs background vocals, keyboard, and samplers live. The band is reuniting this year for a 2013 tour, and has added Laura Burhenn for additional vocals and instruments. The song was released in 2003 by Sub Pop Records. It was consistently ranked in the weekly top 5 most played tracks on Last.fm during 2005 and 2006. The song has also been heard in several television commercials including Kaiser Permanente, Ask.com, and Target. “Such Great Heights” was listed as number 27 on Rollingstone’s 100 Best Songs of the Decade.

Matisyahu is an American reggae and alternative rock artist that is well known for mixing traditional Jewish themes and hip hop beatboxing in his music. “King Without A Crown” was released on his debut 2004 album called Shake Off the Dust…Arise as well as on his second full length album called Youth; however the track was edited and shorter in length. The song reached number 28 on the Billboard Hot 100 and number 7 on the Modern Rock Tracks Chart.

Swedish indie band Peter, Bjorn, & John formed in Stockholm in the year 1999 and simply named their band after their first names. Their song “Young Folks” was released in 2006 on their third full length album called Writer’s Block. The song features guest singer Victoria Bergsman and gained popularity on websites like YouTube and MySpace. The song was number 5 on Pitchfork’s Top 100 Tracks of 2006. The song only had extensive air play on American radio stations like KNGY/San Francisco and KNHC/Seattle. The song is known for its whistling, which was actually added as a replacement for another instrument. The song was re-released in 2007 when it hit number 13 in the United Kingdom.

Crazy Town was known as an American rap metal band that formed in the year 1995. The group consisted of members Mazur, Binzer, Rust Epique, James Bradley Jr (aka JBJ) and Adam Goldstein (aka DJ AM) who collaborated their music in Los Angeles, California. Their single “Butterfly” was released on their 1999 debut album called The Gift of the Game. The release of this album was followed by a tour with The Red Hot Chili Peppers, and the song features samples from the Red Hot Chili Peppers’ single “Pretty Little Ditty.” The song charted number 1 on the Billboard Hot 100. The album sold 100,000 records before the release of the song, but reached number one and sold 1.5 million copies after the song’s release.

Finger Eleven is a Canadian rock band that formed back in 1989. The band has released a total of six studio albums through their music career and “Finger Eleven” was featured on their fifth album called Them vs. You vs. Me. that dropped in 2007. The song received extensive airplay in the United States and Canada, and was performed live on The Tonight Show with Jay Leno. There are 3 versions of the songs available, one is the CD original and two radio edits.

Gnarls Barkley is an American soul duo that consists of two artists known as Cee Lo Green and Danger Mouse (Thomas DeCarlo Callaway and Brian Joseph Burton). The two released their first album together as Gnarls Barkley, in 2006 called St. Elsewhere with the hit single “Crazy.” The song reached number 2 on the Billboard Top 100, and also topped the music charts in England, Denmark, Canada, the Republic of Ireland, and New Zealand. The song was leaked in late 2005 and received extensive airplay on BBC Radio 1. The song also won a 2006 MTV Europe Music Award for Best Song and also won a Grammy Award for Best Urban/Alternative Performance in 2007. “Crazy” was performed at the MTV Europe Music Awards, the duo dressed as Star Wars characters for the performance.

Dynamite Hack was a post-grunge band that formed in Austin, Texas back in 1997. They named themselves from a line in the film Caddyshack, in which Bill Murray’s character is describing the marijuana he is smoking as “Dynamite Hack” to Chevy Chase’s character. The band covered “Boyz In Da Hood” from original rap artist Eazy-E. The song was featured on their album called Superfast in 2000, and made it to number 12 on the Billboard Modern Rock Tracks.