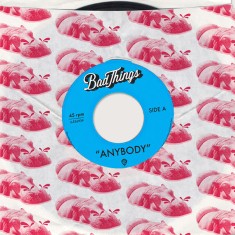 Did you know Olympic gold medalist and professional athlete Shaun White is also in a rock band? His band is known as Bad Things and consists of members Davis LeDuke (vocals), Jared Palomar (bass), Anthony Sanudo (guitar), Lena Zawaideh (drums, vocals), and Shaun White (guitar). The band recently signed to Warner Brothers and are set to release their debut self-titled album in January 2014. Their single “Anybody” resembles that of an indie rock n’ roll style with loud drums and guitar playing throughout the song, and vocals familiar to that of Kings of Leon and The Hives. Although the song has a chill beat to it the lyrics are bitter toward a particular woman, with lyrics like “Why’d you ever care at all, stop don’t talk b*tch why you running.” Overall the track can be interpreted as an angry break up song. “Anybody” is currently available for streaming on iTunes and Spotify.

Check out the official audio video for “Anybody” here!