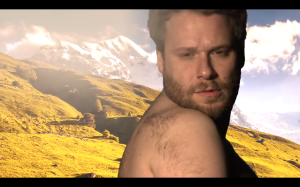 Does it get any better than a Kimye parody with Seth Rogen and James Franco? Not. At. All.

The two comedians recreated Kanye’s latest music video catastrophe Bound 2, shot for shot. After having a lot of downtown during the filming of their upcoming movie, The Interview, Rogen and Franco recreated the video and titled it Bound 3.

Envision Rogen imitating Kim Kardashian’s attempts at being sexy on a motorcycle and Franco lip-synching each verse with flashing visuals of the Grand Canyons. And just when you thought it couldn’t get better, a shirtless hairy Rogan gets romantic with Franco, French kiss included,  and you’re dying with laughter.

The spoof might even be better than the original.

So, who did it better: Kimye or Seth Rogen and James Franco? Watch the video and be the judge.