Happy New Year! Fashion predictions have been trickling out on what trends will stand out in 2014.

I was sad to see emerald go at the end of 2013 but radiant orchid has been named the hot tone for 2014. Pastels are being forecasted as go-to hues for spring (as seen at New York Fashion Week) but don’t feel pressured to dress head-to-toe in baby blue. Incorporate little accents of blush, mint green or soft daffodil with flats or a lightweight blazer. Lilac nails are a nice surprise as well and purple hair would be the ultimate. 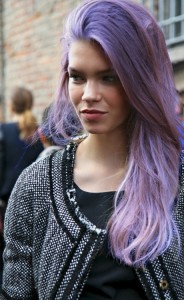 Menswear details have been rolling out in everything from button-down collared shirts to wide legged trousers. These pieces have been popping up in street style over the past year but mixing and matching with feminine details amps it up. Try a color contrast collared shirt or a pair of boyfriend jeans with a fitted blazer. Cara Delevingne does menswear right and adds edgy leather details.

Lastly, outerwear in all forms was named another trend to keep an eye on for 2014. Boxy cropped jackets is one look to get your hands on; Forever21 has a few options in ikat or southwestern prints to dress up black pants or jeans. Bomber jackets were also highlighted for 2014 and I’m a fan of ones with leather sleeves but printed jackets have been popular in street style, as seen below. Finally, collarless coats (à la Olivia Pope from TV’s Scandal) are bringing a chic and polished look to 2014. You can take a risk and combine the collarless coat trend with another hot item of the year by choosing a piece in pastel or with menswear-inspired details like gold, military buttons. 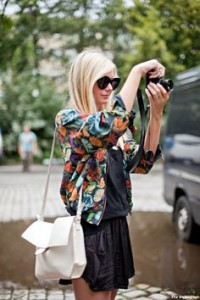 Any trends you’re looking forward to in 2014? Any we missed?