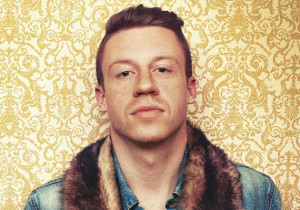 We know him as the man who can find a good deal when thrift shopping, believes in equality when it comes to love, and cannot be held down by anything! But did you know Ben Haggerty, better known as rapper/hip hop artist Macklemore; is the first independently released artist since 1994 to chart number 1 on the Billboard Hot 100? Since 2000, Macklemore himself has released a mixtape, three EPs, and two albums with friend and producer Ryan Lewis. His musical success was done without the help of a major record label. His song “Thrift Shop” was first to hit number 1, followed by his second single “Can’t Hold Us,” which also charted number 1 on the Billboard Hot 100 in 2013. Macklemore and Lewis released their debut album The Heist back in 2012. Upon its release the album charted at number 2 on the Billboard 200 and they have been nominated for 7 Grammy Awards, including Song and Album of the Year. But who is Macklemore behind the fun and energetic rapper? Originally from Seattle, Washington, Haggerty was not born to musical parents. He became in awe of hip hop music at the age of six when listening to edited radio. At age fourteen he began writing his own lyrics and was inspired by East Coast underground hip hop which included such artists like; Nas, Wu-Tang Clan, and Freestyle Fellowship. His musical career began with the release of his EP Open Your Eyes under the stage name Professor Macklemore. He distributed the EP himself and decided to change his name to just Macklemore before releasing his first full-length album in 2005 called The Language of My World. In 2006 Macklemore met Lewis who at first was his photographer before eventually partnering up with Macklemore and producing the rapper’s music. In 2009 Macklemore released The Unplanned Mixtape and in 2010 he and Lewis produced VS. Redux. The EP featured the track “Otherside,” which spoke about the rapper’s past substance abuse. In October of 2012, Macklemore found commercial success with The Heist. The album sold over 78,000 copies within its first week of release. Today Macklemore is currently working on a new album that is set to release within the next three years.