Coachella Valley Music and Arts Festival will run between April 11-13 and April 18-20. It has earned its spot as a staple in the audiophile community and is the perfect place to find your new favorite band. Here are a few acts to check out before festival starts.

Yoann Lemoine, the French director that bestowed the saccharine-sweet video for Katy Perry’s “Teenage Dream” upon us will be performing his neo-folk music act under stage name Woodkid. His sound is experimental without being inaccessible. Fans who discovered and loved Alt-J at Coachella 2013 will enjoy Lemoine’s sound. Watch the video for “Iron” below.

With some radio play supporting them, MS MR is fast becoming an indie-pop  success. Their single “Hurricaine” is interesting and catchy

enough to justify going to the live show. Sexy performances and energetic melodies make the duet a tour de force at this year’s festival.

Surfer Blood has been a darling of the alt-rock scene ever since they openedfor The Pixies’ Doolittle Tour in 2009. Their sound is textbook alternative, lying somewhere between The Smiths and Modest Mouse. Keep an ears peeled for “Swim” one of their more popular singles that can be found on the album “Astro Coast.”

This Sub-Pop signed, all-girl rock group has flown somewhat under the radar so

far, But, Coachella is the perfect place for them to amass the following they deserve. Mellow, and emotional their vibe is comparable The Temper Trap and The Cure. The essence of their ethereal sound is summed up in the seventh track on their 2014 album, “Lost Boys & Girls Club.”

The combination of Motown soulfulness and modern production values give Laura Mvula a sound all her own.  Her voice is reminiscent of Diana Ross, but the music brings jazz vocals into the 21st century. The smoky tunes from this neo-soul singer are sure to make for a fantastic early afternoon show at the festival. Hear her song “Green Garden.”

Among a lot of oldies-but-goodies playing festival, alternative rock icon The Replacements is sure to be a highlight. No offense to Motörhead, Solange Knoweles, or The Pet Shop Boys, but this act has been around since the seventies and still know how to kick some throwback butt. Songs like “Alex Chilton,” and “I’ll Be you” are sure to get an energetic response from audience members new and old. Go ahead and get a re-education on a classic below.

Bonobo puts the chill in chillwave with unique ambient grooves. With music mostly made up of instrumental and vocal samples, the blend of complicated bass lines and haunting melodies put this DJ in a category all his own at this year’s Coachella. “Cirrus” is the single from his newest album, The North Boarder.

Australian electronic rock group Jagwar Ma is making big waves with only one LP under their belt. Their trippy indie electronica should entertain fans who are both sober, as well as the one’s who are not so much. Below, you can check out   “Uncertainty,” the single from their album Howlin’.

If Chris Cornell could be somehow more epic, he’d be in Graveyard. The big sound of this Swedish, psychedelic-blues, rock band feels like something from  the sixties while still staying fresh. “No Good, Mr. Holden” is just one of the 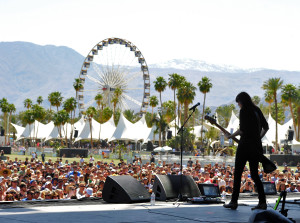 awesome tracks from their hard hitting 2011 album Hisingen Blues. Give it a listen below.

The performance from pop-singer John Newman is sure to be a fan favorite at this year’s Coachella. Already a full on sensation in his home country across the pond this Brit is up-and-coming in a big way. The infections single “Love Me Again,” from his 2013 album “Tribute” is below.