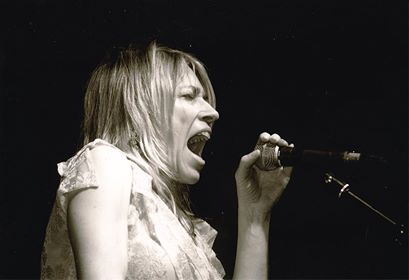 Whether described as the “Ultimate Feminist Rock Goddess” or “The Godmother of Grunge”, Kim Gordon is hands-down a woman who’s always believed in herself and her convictions. Gordon was all about the art and more interested in pushing the limits of music and visuals as opposed to commercialism. Along with her longtime partner and ex-husband, Thurston Moore, she was a member of the highly influential band Sonic Youth that was initially born out of the art scene as opposed to the punk rock scene of the late 70s/early 80s. The band was categorized as “avant-rock” that influenced a laundry list of artists that includes Beck, The Yeah Yeah Yeahs, My Bloody Valentine and Nirvana. The latter would arguably have been a totally different band had Gordon and Moore taken Kurt Cobain under their wing. Gordon’s talent would also inspire the Riot Grrrl movement of the 90s that’s still prevalent to this day.

After graduating from an art institute in L.A, Gordon relocated to New York where she picked up odd art jobs and playing in different bands. Gordon met her future husband Moore when they were in another band, CKM, before forming Sonic Youth together. Sonic Youth’s sound was experimental noise art, which made the band more unique compared to other artists of the time, as they would constantly look for new sounds, such as creating a cheap guitar sound super extraordinary by modifying the string tuning. The New York Times stated, “Sonic Youth was making original guitar-based music since Jimi Hendrix.” Gordon and Sonic Youth represented what few musicians of the time were doing, which was making music for the art while matching the visuals and presentation to create a full experience.

Sonic Youth wouldn’t have gone far without Gordon. Her contralto voice was “one of the great instruments in post-punk history,” mentioned Pitchfork. Her free-form style technique in her bass playing gave her music credit as a musician despite her mixed feelings of the title and despite being labeled as “cool”, Gordon saw herself insecure. “I knew I couldn’t achieve some kind of cool, stylized image, that just wasn’t me… It was a reaction to corporate style. So it was kind of just being yourself, you know walking on stage wearing a t-shirt.” Beastie Boys’ Adam Horovitz added, “Wherever Kim ends up, she is the coolest person in the room.”

Gordon is still active with a fashion line X-Girl and formed a new band, Body/Head after her run with Sonic Youth ended in divorce with Moore after twenty seven years of marriage. Bikini Kill’s Kathleen Hanna spoke kind words about her idol, “She was a forerunner, musically. Just knowing a woman was in a band trading lead vocals, playing bass, and being a visual artist at the same time made me feel less alone. Kim made me feel accepted in a way I hadn’t before.” That statement alone embodies the influence that Kim Gordon has had on millions of women and will continue to have.