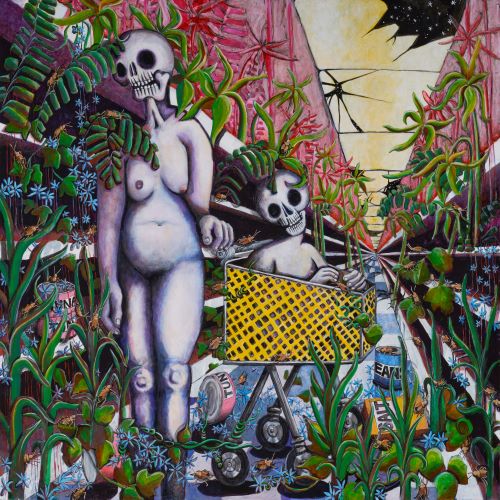 Indigo De Souza is one of the most fascinating, enthralling indie rock artists to emerge in the past couple years. De Souza grew up in the small conservative town of Spruce Pine, North Carolina, saddled right next to the Blue Ridge Mountains. She was raised by her mother, a visual artist, whose psychedelic paintings adorn De Souza’s album covers with images of giant jungle foliage and plump skeleton women in the grocery store. De Souza was one of the only mixed-race students at her school, and would beg her mom to straighten her hair and buy her Lunchables. But Mama De Souza never let her change herself to fit in with the rest of the crowd, picking her up from school each day in a truck covered with naked Barbie dolls, fake bombs, and the names of countries brutalized by American imperialism. By the time Indigo and her sister moved to the artsy hub of Asheville, she had embraced the eccentric nature of her mother, choosing to walk her own path.

I fell in love with De Souza’s debut album I Love You Mom after hearing the breakthrough single “How I Get Myself Killed”. Filled with driving energy and passion, the track turned millions of fans onto an artist whose free spirit shined through on every song. Now, De Souza is back with her sophomore album Any Shape You Take, where she gives us an even clearer look into her artistry which knows no bounds.

There are two kinds of artists: the visceral and the cerebral. For the past 15 years or so, it seems many of the more critically acclaimed indie artists have fallen into the latter category, with intricate instrumentals and esoteric lyrics. Perhaps this is the reason that so many “indieheads” have been heralded as pompous or pretentious, for their insistence on the supremacy of these acquired taste acts, which requires all cylinders firing to enjoy. But what I’ve grown to understand is that oftentimes, artists whose music is based more in raw emotion, whose songs don’t need to be intellectualized, are written off as unthoughtful or undeserving of becoming the next Pitchfork idol.

Indigo De Souza turns these expectations on their head on Any Shape You Take. On “Real Pain”, crowdsourced screams offer a tortured crescendo that also reminds us of the healing nature of community. On “Darker Than death” she pleads through crashing drums, “Was it something I said?’. On the last verse of “Kill Me” she gutturally glides over the lyrics, ‘Fuck me ‘til my brains start dripping / Down to the second floor in our home / Kill me, and clean up, and if they ask you / Where I am, we’ll tell them that I was all done / Tell them that I wasn’t having much fun”

De Souza’s songs grip you almost instantly, and the cacophonous percussion paired with her dynamic voice give her the power to infuse her music with emotion in its most vulnerable, raw form. If someone were to ask me to give an example of a great visceral artist, Indigo De Souza would be the first name that comes to mind. Any Shape You Take makes you want to laugh, cry, thrash around, scream, kick, jump; it begs you to feel each track in your body, not just your mind. That corporeal element allows De Souza to get away with lyrics that otherwise might be cringe-inducing if sung by another artist.

Indigo De Souza is an artist you want to root for. Her wild energy and keen ear have given her the momentum she needs to make a name for herself in the indie scene, and I hope that fans of indie rock will appreciate her for what she is, and find value in her music that truly, deeply, moves you.