LIVE REVIEW: Queens of the Stone Age in Morrison, CO

After gypsy-rockers Gogol Bordello roused the crowd into a frenzy with their eclectic set, Queens of the Stone Age electrified the Red Rocks Amphitheater with the opening notes to “Keep Your Eyes Peeled”, the first song off their new album …Like Clockwork. Frontman, Josh Homme’s voice resonated out over the crowd inciting screams and fan singalongs as the rest of the band set unleashed a furious wave of sound across the stage – this is one band who wastes no time in commanding the stage. 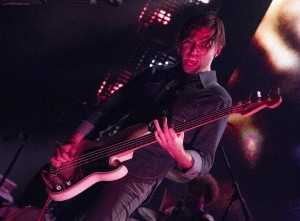 Oscillating video projections on the LED screen that loomed over the band became as hypnotizing as the music itself, easily transitioning between animations involving the new album artwork morphing and changing in time with the song to full-fledged animated videos, providing stunning visuals to the accompanying songs.

With such an impressive and broad discography, it would seem a daunting task to narrow down an 2-hour setlist but QOTSA had no problem including older material for the die-hard fans, as well as some new material for the fresh faces to the Queens concert crowd. Older album favorites like “Little Sister”, “Monsters in the Parasol” and “In the Fade” drew a big fan reaction. “This one is for the ladies.” said Homme with a mischievous grin right before launching into the R&B-influenced jam “Make It Wit Chu”.

The band closed out their set with a 3-song encore, incorporating the best of their material like “Feel Good Hit of the Summer”, “I Sat By the Ocean” and “A Song for the Dead” all for the perfect crescendo, culminating in the perfect summer concert experience.

…Like Clockwork is now available via iTunes and you can try before you buy on Spotify. Queens of the Stone Age will be launching another tour in September – check out these dates to see if they are coming to a town near you, ticket links can be found at the band’s website.