After a one-year hiatus, The Bay Bridged and Noise Pop has brought back Phono Del Sol to the Potrero Del Sol park. San Francisco Magazine has called Phono Del Sol the “Best Music Festival” in San Francisco as it promotes both well-known bands and local music talent at the same time. The festival brought in people from all backgrounds to take in local and emerging artists on a Saturday afternoon.

The first band to play at Phono Del Sol’s Mission Stage was Blues Lawyer, an Oakland-based indie rock band. The band’s guitar strumming had constant rhythmic flows as their music is a unique style that blends in surf rock and alternative and it can turn a boring day into an exciting one. Blues Lawyer captured the audience’s attention with their confident singing, especially when the drummer produced supporting vocals. When the band performed their track, “Charity Case”, it had a notable 1970s-style punk sound, specifically when the rhythm guitarist produced a nice guitar riff.

Oakland-based rap artist Queens D.Light entertained the audience on Potrero Stage, Phono Del Sol’s main stage. Queens D.Light wasn’t alone, however, as she was accompanied by two group members, a supporting vocalist and a sound mixer. Her vocals were very passionate as she sung about the experiences that she’d encountered which helped her become the individual that she is today. She possessed a fire in her voice that resembled some of the best female rappers in the industry such as Mary J. Blige and Missy Elliott. Her rhymes were structured in a poetic melody that allows the listener to sit back, relax, and leave all of their worries behind, especially as they connect with the bass drops and synth leads.

Ah-Mer-Ah-Su is an indie artist who is also based in Oakland. She has a fearless voice that tells everyone she is happy to be herself and she love expressing who she is through her music. Her music was a fusion of connected synth beats, rapid drum and cymbal beats, and a soulful voice that gets the audience dancing on their feet while they’re enjoying the music in solitary bliss.

Salami Rose Joe Louis is an indie band that consist of a saxophonist, a bass guitarist, a keyboardist, a sound-mixer, and a drummer. Their musical style is jazz fusion with influences from rock, R&B, and funk as there were coordinated drumming, saxophone solos, and electronic synths. The keyboardist is also the band’s lead vocalist and her vocals were in sync with the music’s tranquil vibes that echoed throughout Potrero Del Sol. Their music was very genuine and emotional that two members of the audience stood near the stage and danced in a psychedelic trance.

Another Oakland-based indie rock band is Boy Scouts and they’d recently performed at SXSW 2019. The band’s musical style is a creative blend of keyboard accompaniments, guitar solos, and cool vocals. There are also traces of 90-style alternative rock in the music when the lead guitarist, who’s also the vocalist, strummed the guitar to a rhythm that reminds the audience of a certain British band called Oasis. The vocals created an atmosphere where the audience can dance freely with their friends and family and feel very calm at the same time.

Indie artist SPELLLING was joined along with her drummer Janet who provided drum support to her songs. Included in her music was a vibrant mix of soulful harmony, synth, and steady drum beats, alongside bass accompaniments and jingles. The audience was very upbeat and relaxed at the same time as SPELLLING’s smooth voice merged with strong percussion notes.

Alternative band Covet and they started off their performance with two people blowing bubbles on the stage as they vibed to the music’s rhythm. The actions of those two individuals lifted the audience’s mood and assured them that they will witness a perfect performance. The band’s instrumentals are a blend of skillful guitar strumming and heavy-hitting drumming. Covet’s music is ideal for people who love dancing while admiring musical skills at the same time.

R&B group SOL DEVELOPMENT are made up of four main vocalists, a guitarist, a bass player, a drummer, and a keyboardist. Their music is a fusion of funk, indie, hip-hop, reggae and rock-and-roll, and they can transform a somber mood into one that’s full of life. SOL DEVELOPMENT performed tracks that talked about important topics in society including civil rights and police brutality that allow people to think more about the world they’re living in today. One notable moment from the performance was the group asking the audience to raise their fists in the air as a display of unity as they want everyone to show empathy and love for their fellow human beings.

Phono Del Sol concluded with a performance from synth-pop project PORCHES. Aaron Maine, the lead vocalist of PORCHES, had an thrilling voice that matched with the short bass drops, synth loops, light drum beats, and sirens that are in the music. Maine surprised the audience with his rapping skills as he delivered his rhymes and merged them with the music’s electronic melodies, which will leave a few memories for the audience to have. One memorable moment occurred when Maine invited the audience to sing along by repeating the words, “Everybody Goes Outside”.

Overall, Phono Del Sol was a success as it brought many people from all walks of life to share their love of great music with one another. Phono Del Sol was a good opportunity for a person to become a fan of bands and artists whom they didn’t know before they attended the festival. Regarding the bands and artists, the festival served as a terrific platform for them to get their music be heard in front of a large crowd and increase their profile. The success of this year’s Phono Del Sol can make a person feel eager for next year. Check out the photos from Phono Del Sol on 06/15/19 at Potrero Del Sol: 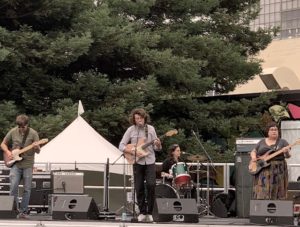 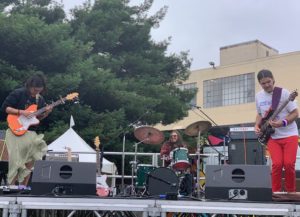