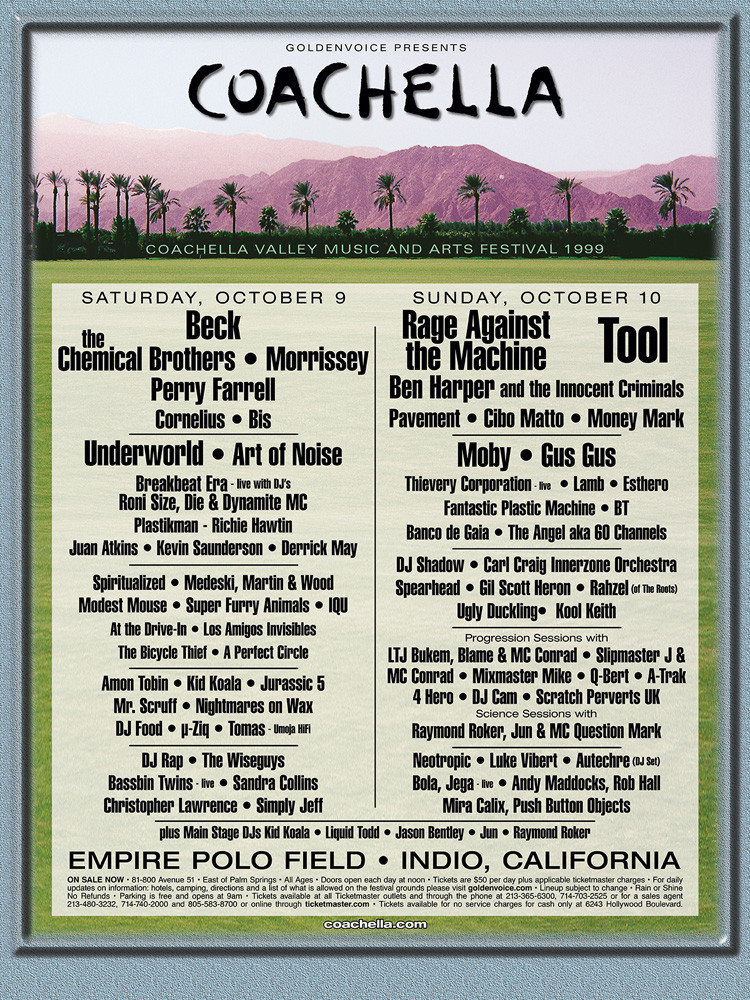 Though Coachella 2021 has once again been cancelled, as we move into what would be Weekend 1 of the iconic festival, we wanted to revisit some of the performances that might have flown under the radar from Coachellas past. We’re highlighting the early performances of some of the biggest artists in music today, revisiting the years before they were headliners and the cultural icons they are today. Hindsight is 2020.
1. Tame Impala – 2011

Tame Impala @ Coachella - It is Not Meant to Be
In 2011, a small Australian indie act led by frontman Kevin Parker took to the Coachella stage for the first time. Who would have known that this band, listed in the fine print of the lineup poster, would be headlining the festival 8 years later. We love to see how the band has evolved, especially since they have taken the production quality of their live shows to such monumental heights.

Galantis - You - Live @ Coachella 2014 - Weekend 1 - Gobi - Saturday
Coachella provided the perfect opportunity to debut the collaborative project of Miike Snow’s Christian “Bloodshy” Karlsson and underground DJ Linus Eklow. After the traction they gained from this 2014 set, they embarked on a major U.S. tour, with their hit song “Runaway (U & I)” raking up over 5 million view on YouTube. Karlsson still says that this performance was really the jump start to their career.

In 2003, hip-hop/rock trio N.E.R.D made their Coachella debut, bringing the energy to their set. This was the first time Pharell Williams took the stage at the major festival, but certainly not the last. With his song “Happy” becoming an international hit, Pharrell moved up the lineup for his 2014 performance. But we love watching this fresh-faced, jubilant performance from those golden early days of N.E.R.D.

MIA Coachella 2005
Before her hit song “Paper Planes” landed her on the main stage in 2008, British rapper M.I.A was a burgeoning artist when she performed at the festival in 2005.
5. Daft Punk – 2006
Daft Punk Live @ Coachella 2006 - Full Set
Although Daft Punk was already a household name in 2006, watching footage of this performance has given us some serious FOMO in the wake of the group’s announcement that they will no longer be making music in February. From the iconic pyramid stage to the palpable energy of the crowd, this performance is one for the history books.
6. Amy Winehouse – 2007
Amy Winehouse - 10 - Me & Mr. Jones - Coachella 2007
Coming just off the heels of her astonishing 2006 album ‘Back To Black’, Amy Winehouse played her set on Friday afternoon. It’s crazy to think that an artist with the cultural weight such as Winehouse wasn’t a headliner, and in the wake of her passing we can’t help but think of the missed opportunity. But Winehouse’s set on the smaller stage gave her even more opportunities to interact with the crowd in a more intimate setting. Knowing everything that Winehouse went through during this time period makes watching her performances retrospectively melancholic, but nonetheless, we would still trade a hand and a foot to experience her cathartic voice in person.
7. Snoop Dog and Dr. Dre – 2012
Tupac Hologram Snoop Dogg and Dr. Dre Perform Coachella Live 2012
This is another act that was already on the main stage when they first performed at Coachella, but the opportunity to see Snoop duet with a holographic Tupac Shakur is priceless.
8. FKA Twigs – 2015
Coachella 2015 - FKA Twigs - Two Weeks
In her debut performance at the festival, British trip-hop artist FKA Twigs dazzled seasoned and new fans alike with her set at the Gobi tent. Between her hypnotic voice, epic songs, and exaggerated dancing, Twigs made it clear that she can put on a show.
9. Kendrick Lamar – 2012
Dr. Dre and Kendrick Lamar at Coachella 2012 Weekend 1: The Recipe
It’s crazy to think that even in 2012, the most celebrated rapper alive and Pulitzer Prize winner, Kendrick Lamar’s name was in the final line of the lineup poster. This performance was just after the release of ‘good kid, m.A.Ad city’, the album that shot Kendrick into public discourse. To see Kendrick in his elementals during this era of his career would truly be a gift.

Frank Ocean - Coachella (Live) NEW SONG
In the spring of 2011, the elusive artist Frank Ocean released his mixtape ‘Nostalgia, ULTRA’, which cemented him as one of the fastest rising artists of that moment. Though he was met with initial technical difficulties, the set managed to overcome any failings of the sound system, playing his hit “Thinkin Bout You” and revealing the track “Forrest Gump” for the first time with the blossoming spirit of the next cultural icon.