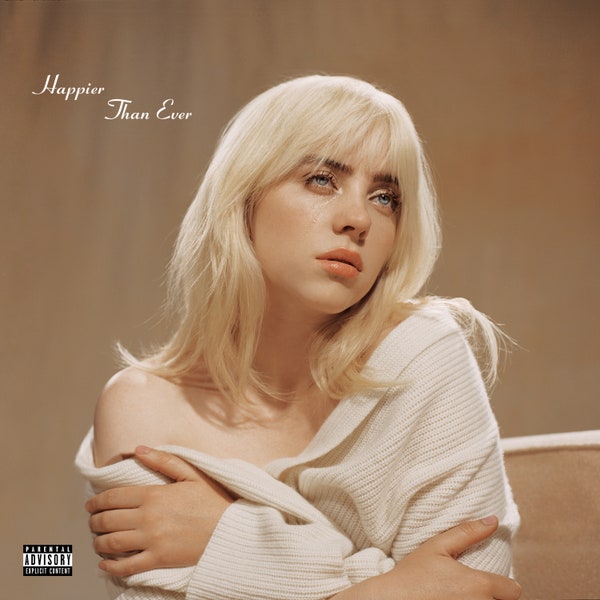 ALBUM REVIEW: Billie Eilish Wrestles With Fame and Intimacy on ‘Happier Than Ever’

From the moment Billie Eilish first started garnering mainstream attention with her 2017 EP ‘don’t smile at me’, she was accused of being seemingly the worst thing an artist can be labeled nowadays: an industry plant. Billie’s origin story is part of her appeal, the girl who loved singing and writing songs with her brother in her childhood bedroom, who found her big break in the internet age with her viral single “Ocean Eyes”. Her humble beginnings connected her to a young audience, whose hopes, fears, and sonic palates were captured in every one of her songs. When the time finally came for the breakout artist to release her debut album, she had already cultivated this devoted, and particularly young, legion of fans who were ready to see Billie become the next international sensation.

And what a sensation she became, with ‘WHEN WE ALL FALL ASLEEP, WHERE DO WE GO?’ dominating the global charts and cultural conversation for the rest of the year. On this debut, Eilish exuded brash confidence with horror-clad songs like “bad guy”, “you should see me in a crown” and the album’s title track. In many ways, it was the perfect debut for such a young visionary and tastemaker, unapologetic with its in-your-face energy right out of the gate. 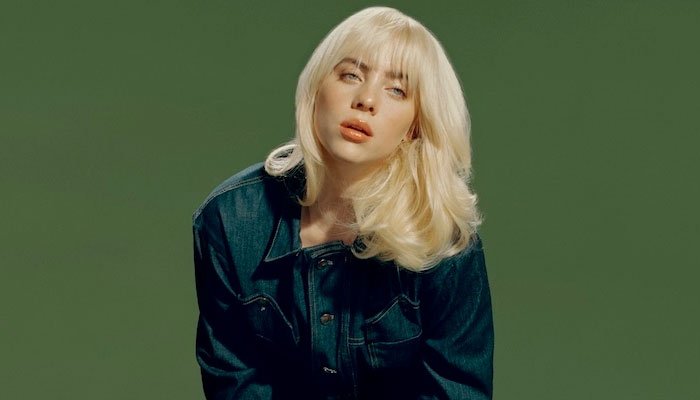 The dreaded sophomore album is no small feat for any artist, but for someone who has achieved the kind of global superstardom Eilish has, it’s easy to see how the pressure to follow up such a strong debut could be absolutely suffocating. Eilish’s name has become a global topic of conversation, and the album would either solidify that success or become infamous in her discography. The monumental success she’s achieved comes with an equal amount of criticism and scrutiny from the public, and Billie is forced to bear witness to it on social and mainstream media alike.

The scrutiny hurled at Billie Eilish is really indicative of how the music industry and our culture treat young women. Eilish’s signature look of loud designer sweatsuits was praised for its modesty and creative expression. But Eilish’s body became a source of salacious debate, with paparazzi photos of her wearing form-fitting clothing being plastered across newspapers and social media trending pages alike. Her modesty became a kind of fetish for the public, who were foaming at the mouth to get a look at the exotic mysteries that lied beneath those enormous Dior sweatshirts. Billie has always handled this gross discourse gracefully, occasionally speaking out when the fervor gets too out of hand, but more frequently simply continuing to express herself through whatever style she pleases. But she has expressed much more discomfort at the other discourse around her personal style, when people have used her “modest” clothing to shame other women in the industry for choosing more revealing pieces. Billie was constantly pitted against these women, heralded as an oversimplified icon of female empowerment, her image used to blatantly slut-shame other women.

So when Billie revealed her new platinum blonde hair earlier this year and began releasing press photos that showed her leaning into a more glamorous and feminine aesthetic, there was true commotion. Eilish herself beat everyone to the punch though when she released a clip of what would become the interlude “Not My Responsibility”, on ‘Happier Than Ever’ where she finally declares that she will not be held accountable for the insatiable appetites of the media and those who have become obsessed with her physical appearance. She played the song and its accompanying video at three shows before her tour was cancelled and the pandemic set in. On the record itself, the track feels like a necessary break, a message from the artist herself that gives us a lens through which to interpret this new work.

I bring up Eilish’s past not to engage with these problematic discussions, but rather to illustrate a point that is vital to understanding and appreciating ‘Happier Than Ever’. Billie Eilish has become more than just a girl in her bedroom recording songs; now she has become a cultural icon, whose every move will be relentlessly debated in the public sphere. She is keenly aware of her status as one of these figures, and ‘Happier Than Ever’ is an exploration of that unique position while still trying to capture the relatability and humanity that endeared her to millions of fans across the world. How can one of the world’s biggest superstars write an album that can still resonate with the common man, or the average teenage girl? It’s an exceptionally difficult task, one that many artists might shy away from. But Eilish knows that in order for her to actualize the sheer potential of her career and artistry, we need to have the conversation now.

After the release of the first few singles, some fans proclaimed this would be Billie’s “flop” era. It’s a fair concern for a sophomore album, and while I think the singles “my future”, “therefore I am” and “NDA” are arguably some of my least favorites on the record, I still think these fans sounded the warning bells too early. “NDA” is a bumbling, forgettable track that takes itself just a little too seriously. The title alone generated quite a bit of excitement for its release, but as soon as the song concludes, I will never think about it again. “my future” is a jazz-tinged ballad whose opulent production feels out of place with the tender flatness of the melody. And while I appreciate the ballsy energy of Eilish’s spoken verse on “Therefore I Am”, its catchiness feels like it hooks me more so due to formula than spirit. The only other lowlight for me on this record is the track “Everybody Dies”, which has the same unremarkable feeling as “NDA”, out-of-place grandeur as “my future”, and some heavy-handed lyricism musing on the nature of death and endings. But even these low points are made up for in plenty throughout the rest of the record.

I really love hearing Billie experiment with different genres on ‘Happier Than Ever’. While “Billie Bossa Nova” is probably not going to be one of the biggest hits on the album, the latin flare of a snapping clava mixed with Eilish’s whispering vocal is absolutely delicious, and the song’s smoothness and placidity is appropriate for a tribute to the genre. On “Oxytocin”, “GOLDWING” and “Overheated”, she explores techno with crisp synths and biting snares. The eerie quality of her voice is really amplified here, revealing the versatility and intrigue of her vocal tone. Even when Billie toys with these different genres, it always sounds like her take on them. A good artist can emulate a certain sound, but a great one like Billie has the power to see the hidden links between her sound and a foreign one, and to incorporate it into her own sonic library, letting it sit until she’s ready to pull it off the shelf.

The album opens with “Getting Older”, where Billie reflects on how she’s grown over the past couple years. It’s a vulnerable opener, where Billie reveals “the strangers seem to want me more than anyone before”, “my sentences all sound rehearsed”, and that “the things I once enjoyed, just keep me employed now”.  Thus, we are welcomed into the album with a disclaimer: Billie Eilish is still human, she is not your deity, and she does not want to become one. The bouncing instrumentation is tentatively whimsical with a touch of melancholy, which perfectly complements her lyrical intimacy.

“Lost Cause” is one of the rare moments we get a taste of Billie’s old bad guy persona, but some of the grandeur has been stripped back. What results is a raw, mature take on a “fuck you” breakup song. Instead of wallowing in the devastation of unrequited love, Billie is almost incredulous as she sings about all the time and affection wasted on this loser over a juicy funk bassline.

“Halley’s Comet” is one of Eilish’s signature swirling ballads that makes up for any shortcomings of “my future”. It’s beautiful, lush, and lovesick while still feeling sincere.

“Your Power” was one of the lead singles from ‘Happier Than Ever’, and for an artist who has become the textbook example of young women’s sexualization in the media, it feels obvious why. Above a bright acoustic guitar, Billie describes the ways in which people can manipulate someone who is young and naïve, and it’s hard not to feel a pang of sympathy, knowing that regardless of what interpersonal situations she’s been in, Billie has been the epicenter of those bad intentions for the duration of her career.

But my favorite song on the entire album by far is it’s title track “Happier Than Ever”. The song opens with a softly strummed ukulele, calling back to the singer-songwriter’s humble origins. Calm, cool, and wistful, she declares that “when I’m away from you, I’m happier than ever.” Suddenly, the strumming picks up and melts into an electric guitar as we snap into focus. That calm, placid intro is suddenly transformed, and an epic anthem about the trials of falling in love emerges. There are some rare songs that capture an emotion so precisely and particularly that they completely envelop you in what the artist was feeling. On “Happier Than Ever”, as soon as the uke fades and we snap into focus, we are instantly transported into all the exaltation, catharsis, and pain within Eilish’s world. It’s electrifying; it’s pure magic.

On the closing track “Male Fantasy” Eilish tries to distract herself from heartache by watching pornography and is confronted with an uncanny portrait of female pleasure. “I hate the way she looks at me, I can’t stand the dialogue, She would never be this satisfied” she sings. It’s visceral imagery that hits softly when paired with the wafting acoustic guitar on this track. Eilish has said she closed ‘Happier Than Ever’ with this track so as not to end on the angry catharsis of the title track, but this choice means the record nearly fizzles out in its final few minutes.

‘Happier Than Ever’ may fall short on some individual tracks, but the portrait it paints of Eilish is a potent and endearing one. ‘Happier Than Ever’ reveals to us that the global superstar still has that earnest, grounded core that drew so many fans to her in the first place, and that just as the public wrestles with her image and monumental fame, she is also quietly considering the unique position she inhabits. Eilish channels the confusion, tentative excitement, and mounting fear that comes from those considerations into her art time and time again, and when we break through to those moments where she perfectly captures those anxieties sonically, we can see the true prowess of the world’s biggest pop star.