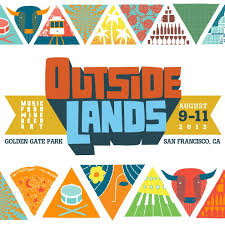 Many of you music fans are already aware that the annual San Francisco music festival known as Outside Lands, is upon the Bay Area in just over a week starting Friday August 9th in the beautiful Golden Gate Park. In honor of the three-day music infused event, B-Sides is providing you with our Top 11 musical acts every Outside Lander should not miss!

English pop singer/songwriter Jessie Ware made her appearance onto the music scene back in 2009 when she performed backing vocals for live performances with Jack Penate and Man Like Me. In 2010 one of his band mates introduced her to SBTRKT, and the two collaborated on the single known as “Nervous.” In 2011 Ware released her debut solo album called Devotion, in which her third single “Wildest Moments” charted at number 46 in the United Kingdom. In August of 2012 the album reached number 5 on the UK Album Charts and was a nominee for the Mercury Prize. Since the beginning of 2013, Ware has been touring all over the UK and is now playing many festivals this summer, including Outside Lands 2013. Her lovely low yet harmonic voice and relatable songs make her an act you don’t want to miss!

Forming back in 2008 from San Diego, California, Wavves is a surf rock band that began their musical career by releasing a couple of 7″ s as well as a cassette of their first two releases, Wavves (Woodsist) and Wavvves (Fat Possum/Bella Union). The band soon began a tour in the United States and Europe shortly before releasing their debut self-titled album during that same year. In 2009 they released their second album Wavvves, and in early 2010 the band released their third album called King of the Beach. The album was listed as the 24th best album of the year by Spin Magazine, and their hit single “Post Acid” was promoted on a short cartoon called “Scott Pilgrim vs. Animation.” The band released their fourth album known as Afraid of Heights  in 2012 and their first single on the album “Demon to Lean On,” reached number 36 on Billboard’s Alternative Songs Chart.

Aussie alternative rock band Atlas Genius stepped onto the music scene back in 2011 when they released their single “Trojans.” The song had big success in the United States when it charted on Billboard’s Alternative Songs Chart reaching number 4! The band says their inspiration comes from such artists like Death Cab For Cutie, The Police, and Beck. In 2012 the band was signed to Warner Brothers Records and released their debut EP Through the Glass. Their single “If So” has also charted at number 9 on Billboard’s Alternative Songs Chart. The band is currently on their first North American tour, and will no doubt be stopping by Outside Lands this year for an amazing performance!

Foals are an English indie rock band from Oxford, England. The band came together back in 2005 working on their debut album Antidotes, which released in 2007. The album was produced in New York by Dave Sitek of TV On the Radio, the album did not release officially until March of 2008 in the United Kingdom and April 2008 in the United States. In August of 2009 the band began work on their second full length album Total Life Forever, the hit single on the album was “This Orient” and the album released in May of 2010. In 2012 Foals mentioned on their Facebook page that they were working on their third full length album titled Holy Fire. The album dropped in both the United Kingdom and the United States in February 2013.

Forming in 2006 from Dana Point, California and later Costa Mesa, Orange County, The Growlers are an indie rock band that are well known for their 1960’s psychadelic rock sound. The band released their debut album Are You In Or Out in 2009 and their second album Hot Tropics in 2010. The Growlers note themselves as the band that created the music genre ‘Beach Goth,’ this is most likely due to their heavy garage rock riffs and dark lyrics. The band released their third and most recent album this past January of 2013.

Brooklyn, New York indie pop duo Matt & Kim came together as a band in 2004. The two attended Pratt Institute and began dating one another, at the time they did not know how to play their instruments (drums and keyboard). They both had the erge to learn these instruments strictly out of interest with no intention of starting up a band; however, once they began playing together in basements and other small venues the two gained many fans fast. They decided to give their fans music they could take home with them and that is when they released their debut EP To/From. Since then the band has made four full length albums, the most recent known as Lightning which released in June 2012. Since the start of 2013, Matt & Kim have been on tour in the United States, be sure to check them out this year at Outside Lands!

French indie rock band Phoenix originally formed as a band back in 1999. They played as a ‘garage band’ in the suburbs of Paris in vocalist Thomas Mars’ home. It wasn’t until two years later the band created 500 copies of a single on their own record label known as Ghettoblaster. Soon after they were signed to a Paris Record label called Source Records, and became good friends with fellow label mates Air, who were their backing band on a couple of UK TV appearances. Later on in their music career in the year 2009, they announced their fourth album Wolfgang Amadeus which won the band Best Alternative Music Album at the 2009 Grammy Awards. Their single “1901” hit number one on the Billboard Hot Alternative Songs Chart and the album also received Gold by the RIAA. Their latest album Bankrupt!, was released this year and has currently reached number 4 on the American Billboard 200 Album Chart. Be sure to check out this French frenzie at Outside Lands this year!

Industrial rock band Nine Inch Nails came together in the year 1988 in Cleveland, Ohio. The band has been lead by frontman Trent Reznor, who is the main producer, singer, songwriter, and instrumentalist for the band. He is also considered the only official member of the band and has been the one to lead it since its creation. Underground music fans brought light to Nine Inch Nails back around the time the band originated. Many of the band’s songs have made airplay on radio, won Grammy Awards, and their entire album collection has sold over 30 million albums worldwide! In 2012 Reznor confirmed with the media that the band was in the works of new material, and in 2013 the band has been touring through North America. Check out Nine Inch Nails this year at the Outside Lands music festival!

New York City based band Vampire Weekend came together as a band in 2006. They released their first self-titled album in 2008 under XL Recordings. The album made huge success in the UK and the US, it reached number 15 on the UK Albums Chart and number 17 on the Billboard 200. Four singles on the album that had great success, including “A-Punk” which reached number 25 on the Billboard Modern Rock Chart, as well as “Oxford Comma” that hit number 38 in the United Kingdom. The band also released their second album Contra in 2010 and their third and most recent album Modern Vampires of the City in 2013. The album reached number one on the Billboard charts as did their previous album Contra with its release, therefore making it the second time the band had reached number one on the charts with two consecutive releases. Modern Vampires of the City has helped the band reach number one on the Indie, Alternative, Digital, and top 200 charts.

New York City indie rock band the Yeah Yeah Yeahs formed back in 2000, and according to an interview with ABC’s Live from Central Park Summerstage series, the band’s name comes from the modern New York City vernacular. Singer Karen O and drummer Brian Chase met through college in New York and later met guitarist Nick Zinner in a local bar. The band has recorded a total of four studio albums including their recent album Mosquito, that released this past April. With Karen’s overpowering heavy vocals and the band’s overall art post punk vibe, you will not be disappointed when you catch this act at Outside Lands 2013!

For B-Sides’ number one Outside Lands 2013 act that absolutely no one should miss, is the performance of Sir Paul McCartney! The legendary singer, songwriter, and guitarist has been described by Guinness World Records as “the most successful composer and recording artist of all time.” He has had 60 gold discs and sales of over 100 million albums and 100 million singles! He is also “the most successful songwriter” according to United Kingdom Chart history. Over 2,200 musicians have covered McCartney’s Beatles song “Yesterday” which is more than any other song in history! Today he has sold over 15.5 million RIAA-certified units in the United States. Need we say more? Check out Paul McCartney this year at Outside Lands 2013!