Music festivals are like mini-meccas for music lovers of a certain temperament. A weekend-long party filled with great music, interesting characters, and excitement at every turn are these modern day Woodstocks. But it’s not all multicolored flowers and cheap drugs, there’s an ugly side to these bastions of the hippy lifestyle. Lollapalooza, Coachella, and Bonnaroo aren’t only filled with cheering crowds. B-sides is here it answer the question, music festival: friend, or foe? 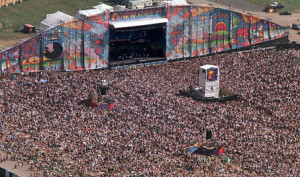 The first thing a festival goer will notice is that the event is held outdoors. If it’s recently rained there will be mud, if there are drought conditions walking feet will kick up dust. Everyone there will be meeting head on with mother nature along side tens of thousands of other attendees. Yes, they’re dirty, smelly as well, yet other wise normal people genuinely enjoy going to them. Why is this?

As far as promotional advertising gimmicks, you can’t have much more fun than these events. At every major festival there is a blitz for product placement. Depending on which one you go to, all five sense will be overwhelmed with events sponsored by Budweiser, Red Bull, or Spotify. Whether it’s the Heinken Dance Tent, or the Mountain Dew Party Bus the advertisers provide entertainment that is worthwhile and completely separate from the bands performing. One may feel like a sell-out when getting a makeover at the H&M tent, but that’ll only happen if you’ve lost your sense of fun. Even if they are supported by fortune five hundred companies, the festivals still give the impression of a grassroots campaign for entertainment.

The surprisingly undervalued part of music festivals is the value. They’re cheap, relatively speaking. Sure, most concerts don’t cost upwards of 300 dollars a ticket, and don’t require you to accommodate yourself with lodging and food. But, think about it for a second. This year’s headliners at Coachella were Outkast, Muse, and Arcade Fire. Buying three separate tickets with decent seats to see those acts would set you back a pretty penny. And that’s just three groups, there are dozens at every major festival. They may seem expensive on the surface because the food is overpriced and the campsites are under-accomidated, but there are few places that two people could take a memorable four day vacation that would cost less than $1,000. And even if people could, there’s a good chance you’d never run into Kanye West while you were there. 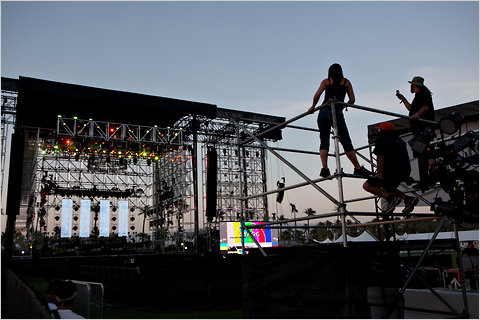 The conclusion? Festivals are only getting more popular, but all indications are that this too shall pass. Our advice would be to ride this wave. Sure it’s silly, exhausting, and dirty but you’re only young once. Chances are that we will tell our grandchildren how great these things were, and they will stare at us in abject horror when we answer the question as to how we used the toilet. But let ’em stare, because the truth is that these events are pretty great no matter what our unborn grandchildren think.